So, it’s a little bit overdue but here’s my review of the Season 4 Tabletop Episode of Fate Core. Tellingly, Wil says something to the tune of “the gold standard of narrative RPGs”, which I would think should be on the back cover of the book now.

Ryan Macklin, one of the developers of Fate Core, runs Wil Wheaton, Felicia Day and John Rogers through a game of Fate. From the setup, it appears that Ryan has the initial premise of urban horror fantasy spelt out, but in true collaborative style, it seems to be heavily influenced by the choices that the players make at the table. They go through character creation (not entirely, but they allow stunts and some aspects/skills to be defined in play). They play through a semi-interlude, a couple of scenes before their final combat.

It’s currently playing on Alpha, a subscription service combining Geek and Sundry shows with Nerdist. It has a 30 day trial period, so you may want to take a look.

I was a big fan of Titansgrave when it came out, and the editing style is present here to the show’s benefit. I’ve tried a couple of times to watch Critical Role, but for four hours in length, I feel like I’m observing someone else’s table. For me, Wil gets the difference between making a tabletop RPG experience enjoyable for a non-participating viewer which live streams just can’t provide. Slick editing and enhanced post-production graphics go a long way to help the episode flow and keep the audience informed of the mechanical actions of the game.

Ryan was fantastic at leveraging the creative juices of his players and impacting those choices on the story, and it may have been cleaned up in editing, but the players were superb at jumping at ideas that struck them. You could see the excitement spark between them, and the positive reinforcement of good ideas driving the story forward.

An actual play intro to Fate

I would totally be ready to recommend that someone watch this to get a feel for Fate before coming to any table to play. It should be coming out in on YouTube in May, making it almost required viewing for long term Fate players. It explains without belabouring and has good examples of how the system pushes the narrative forward, particularly the Fate Fractal concept.

Things I’m trying to get over

“I use my deceive skill.”

It’s a bugbear of mine in storytelling games, but gaming the narrative to use your peak or high skills before telling the GM what you actually want to do irks me a little. The beautiful thing about Fate is that you can say what you want to achieve, then the GM encodes that description into the Four Actions and Four Outcomes. I don’t necessarily blame anyone, as it’s a very gamist thing to do and makes sense, but I think that it misses the spirit and elegance of the Fate system.

Fate Points in the interlude

I’m getting real petty here, but making the player spend a fate point on nameless NPCs that are destined for death rubbed me the wrong way. I think Ryan realised it wasn’t going add anything, cause he gave a bit of a soft compel to that same character later on in the game. Like I say, really petty and a minor point at best.

I say them in the intro spiel that Wil gave, but no using them? Again, minuscule and petty, but I would have like to see them in action at least for one round.

Overall I liked it a lot. It showcased the strength of the Fate system, the players were into it and fed the story, and the GM was nudging the out of control bus in more exciting directions. I could watch another three episodes very easily, and I’m thinking about giving Titansgrave another viewing. My negatives are really nitpicky from a Fate GM watching, and I hope don’t distract the majority of readers from watching the episode. It’s the main reason I obtained an Alpha subscription, and I hope the Wil makes more of these types of shows in the future. 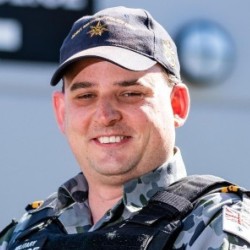